Shoulder subluxation, defined as a partial or incomplete dislocation that usually stems from changes in the mechanical integrity of the joint (muscles, tendons, ligaments) is a common issue with hemiplegic stroke survivors. There are several protocols for treating subluxation, such as electrical stimulation, but it’s often done improperly due to misconceptions about what’s considered “standard practice.”

Studies suggest that the supraspinatus and posterior deltoid muscles are the primary muscles to target when using electrical stimulation. Contrary to popular belief, this may not be the case. This blog aims to revisit what we already know about subluxation and proximal migration and challenge traditional beliefs many of us have embraced throughout our careers.

Let’s dive into when to use electrical stimulation and what the optimal muscles are for targeting.

END_OF_DOCUMENT_TOKEN_TO_BE_REPLACED 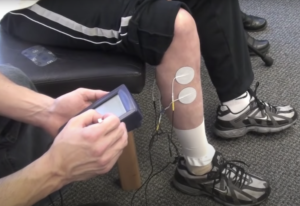 Foot drop, also known as dropped foot or drop foot, is the inability to raise the front part of the foot up toward the shin. This happens due to weakness or paralysis of the muscles that lift the foot (National Institute of Neurological Disorders). Patients who suffer from foot drop often scuff their toes along the ground; they may also bend their knees to lift their foot higher than usual or swing their leg out to the side to avoid hitting their toes on the ground. Electrical stimulation has been proven to help patients manage symptoms associated with foot drop.

END_OF_DOCUMENT_TOKEN_TO_BE_REPLACED

A Guide to Electrical Stimulation Therapy for Stroke Patients

In simple terms, electrical stimulation is the sending of electrical impulses to generate a muscle contraction. This is usually done via surface electrodes stuck to the skin over the target area. The muscle contraction may be very small to help with pain or sensation, or it may be large enough to produce a visible movement at a joint.

Following a stroke or other neurological injury, you may be left with muscle weakness or complete loss of movement (sometimes called hemiplegia). You may also experience a sudden inability to perform everyday tasks, sensory loss, pain, or a combination of these symptoms.

END_OF_DOCUMENT_TOKEN_TO_BE_REPLACED

Questions about the SaeboStim Micro?

Check out the video below to learn more about this popular sensory electrical stimulation device. In this video, Saebo’s Director of Clinical Services, Dr. Scott Thompson addresses some of the most frequently asked questions from our clients, including:

Why is my hand not moving when I put on the device?

When can I expect results?

Why can’t I feel the SaeboStim Micro at its highest setting?

END_OF_DOCUMENT_TOKEN_TO_BE_REPLACED

I feel compelled to share my win with you today! After my injury, I never really expected to get much movement back in my shoulder. I haven’t been able to get so much as a twitch. However, by using the SaeboStim One, I am now getting a tiny bit of voluntary movement. It is a pathetic movement, but it is a movement under my power!

I can see excellent benefits and results in terms of returned sensation, overall safety, and function.

As a therapist, I have struggled with treating sensory loss for many years.   I have found there to be limited treatment options available, and those that are available have limited effectiveness.   I have recently begun trialing the SaeboStim Micro to assist with recovery from sensory loss and am thoroughly impressed with the results!

END_OF_DOCUMENT_TOKEN_TO_BE_REPLACED

The SaeboStim Micro has been a wonderful success already!

Five months post-stroke, my husband had still been having hand spasms, always when he yawned, but at other times as well. He spent a lot of time with his hand on a heating pad. After only a couple nights of using the P2 mode of the SaeboStim Micro, he was surprised to find he no longer had the spasms when yawning, and very few during the day. We are hoping for more improvement as time goes by, but the SaeboStim Micro has been a wonderful success already!

END_OF_DOCUMENT_TOKEN_TO_BE_REPLACED

Very often, limbs of the upper and lower body are affected following a stroke or neurological incident. For example, little or no hand function could be a symptom of the incident. Without the proper attention and therapeutic intervention, the body slowly loses muscle strength, and function is lost.  Many people are left with minimal hand function, and some with limp hands (flaccid). So what is there to do?

END_OF_DOCUMENT_TOKEN_TO_BE_REPLACED

Important Facts Of The First Stage Of Stroke Recovery

Every stroke is different, and every patient’s stroke recovery experience is, too. Just as your symptoms depend on the severity of the stroke and treatment you received, your ability to regain certain functions and work toward recovery will also depend on a variety of different physical factors. However, it helps to know a little more about what to expect in the days and weeks ahead.

You’ve learned about the different stages of stroke recovery, but in order to simplify this experience and improve recovery odds, it’s important to understand more about each stage. If a patient or loved one has recently experienced a stroke and lost motor control on one side of their body, they’re probably in Stage 1 of their recovery process.

But what exactly does “Stage 1” mean, and how can patients and their caregivers navigate this first chapter of the journey toward recovery? Let’s start by breaking down the nature of this first stage. After you understand the basics of your Stage 1 progress, start applying some of the most helpful recovery techniques to reach the second stage.