Electrical stimulation therapy is a therapeutic treatment with a multitude of uses. It can help prevent atrophy and build strength in patients with injuries. It can be helpful in restoring function and reducing edema, especially after a stroke. In electrical stimulation, non-invasive electrodes are placed on the patient’s skin, causing the targeted muscles to contract. A mild electrical current is sent to an area of the body that is receiving confused, few, or no signals from the brain after a stroke. This stimulates the body’s inner electrical system, inducing new connections to be formed in the brain and, in turn, allowing for greater control of the particular area of the body. Electrical stimulation works by mimicking the natural way the body exercises its muscles. With electrical stimulation, the patient is able to maintain muscle tone and strength that would otherwise waste away from lack of usage.

Electrical stimulation therapy has given patients with neurological damage a better quality of life. In cases of spinal cord injury or stroke, patients are often left with pain and the inability to use parts of their bodies. Electrical stimulation can revive connections in the nervous system over time so that controlled mobility is regained and chronic pain relieved. Electrical stimulation for stroke survivors wakes up the damaged areas of the brain so that they can be reconnected with other parts of the body. Repetitive treatments can potentially nudge these areas back to life, giving stroke survivors renewed ability to use limbs or suffer less pain.

Benefits of Electrical Stimulation for Recovery

There are many benefits to electrical stimulation therapy for stroke patients. Therapists and doctors alike find that this therapy works in many different ways to benefit stroke survivors.

In addition to sensory issues, stroke patients can also face challenges due to edema. Edema is the buildup of excess fluid in tissue cavities and can be difficult to prevent, particularly in patients that are immobile. Fluid buildup can occur for a number of reasons, but it is especially common in stroke survivors who have lost the use of a limb. The muscles in the limb become dormant and are unable to move fluid properly through the lymphatic system. The limb then becomes a sink for this fluid. After a stroke, a survivor can often feel pain. Electrical stimulation contracts the muscles to get the fluid moving and eventually eliminated from the body. Electrical stimulation produces endorphins, calms muscles and can potentially help alleviate chronic and mild pain.

Spasticity is generally considered to be detrimental to the patient. Spasticity can lead to contractures, dislocation of joints, and can mask volitional control in case of paralysis. Electrical stimulation not only relaxes the contracted muscles, but it can potentially rewire the nervous system to restore proper control over these body parts.

There are multiple types of electrical stimulation used in the treatment of patients with neurological damage and disorders. The terms commonly used for this type of treatment are:

The terms EMS and NMES, in a broad sense, are similar in that they are both used to describe the stimulation of muscular tissues via electrical impulses. NMES is the common term used for electrical stimulation therapy for stroke survivors, and the terms FES, ETS and RETS all fall under the NMES category.

FES is commonly used when a patient is working to regain the use of a paralyzed body part so that function can be improved or restored. For example, improving a hand to better grasp utensils for feeding.

ETS is used in the treatment of limbs that are still receiving a partial signal from the nervous system. The ETS device detects this and is prompted to give a pulse when it occurs.

EMG or electromyogram-triggered stimulation is a combination of biofeedback and stimulation. It is based on the client’s own voluntary muscle activity or intentional movement. This “volitional”-based application requires the patient to actively participate (i.e., contract a muscle) in order to receive stimulation to the area.

RETS Reciprocal EMG-Triggered Stimulation is ideal for patients with increased tone that have difficulty relaxing or “shutting off” the spastic muscles. Stimulation is triggered to the desired muscle group (i.e., finger extensors, elbow extensors etc.) when the client relaxes the opposing hypertonic muscle group (i.e., spastic finger flexors, elbow flexors etc.). Therefore, the emphasis is placed on relaxing the hypertonic muscles in order for stimulation to be triggered to the opposing weakened muscle group.

TENS is predominately used for pain relief, pain management/treatment, and nerve-related pain conditions (acute and chronic conditions). TENS machines work by sending electronic stimulating pulses across the surface of the skin and along the nerve strands. The stimulating pulses help prevent pain signals from reaching the brain. TENS also also helps stimulate the body to produce higher levels of its own natural painkillers, endorphins.

Electrical Stimulation Is Not for Everyone

Areas of the body that should not be targeted with stimulation electrodes are:

Electrical Stimulation Devices for At-Home Use

Saebo has developed electrical stimulation devices for patients to use in a rehabilitation environment, as well as in the comfort of their own homes. 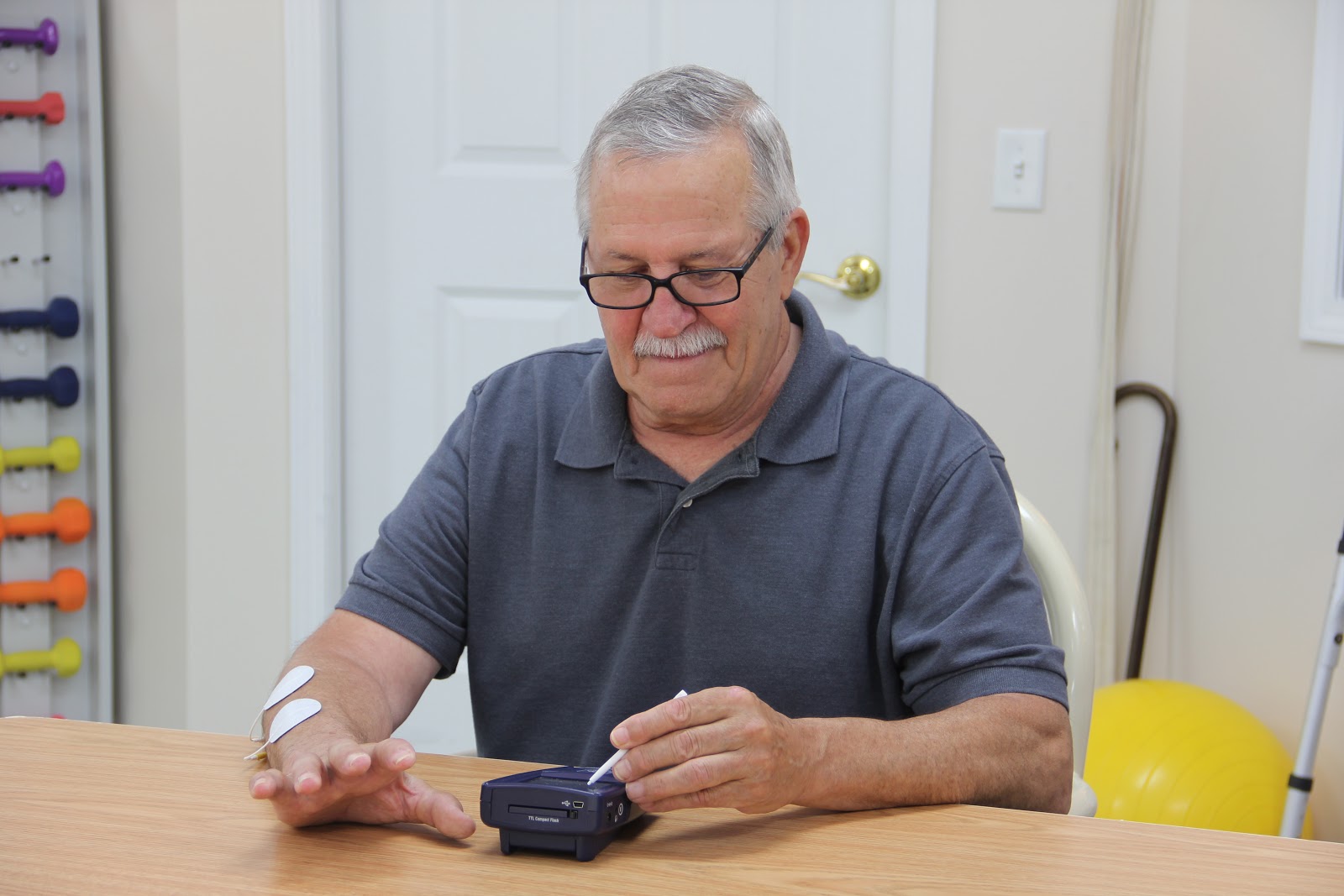 The Saebo MyoTrac Infiniti is a comprehensive and portable advanced biofeedback electrical stimulation system designed for orthopedic and neurological patients. The advanced biofeedback triggered stimulation programs (EMG-triggered stimulation and Reciprocal EMG-triggered stimulation), along with the revolutionary foot drop treatment application, make the Saebo MyoTrac Infiniti a one-of-a-kind device. It is based on the client’s own voluntary muscle activity or intentional movement. This “volitional”-based application requires the client to actively participate (i.e., contract a muscle) in order to receive stimulation to the area. The clinician will set a prescribed threshold that the client must reach when activating his or her muscles. Once the client exceeds the preset level, he or she is rewarded with stimulation to the same muscles. Visual and auditory feedback allow the client to monitor progress. Through this cognitive relearning process, cortical plasticity can be achieved. 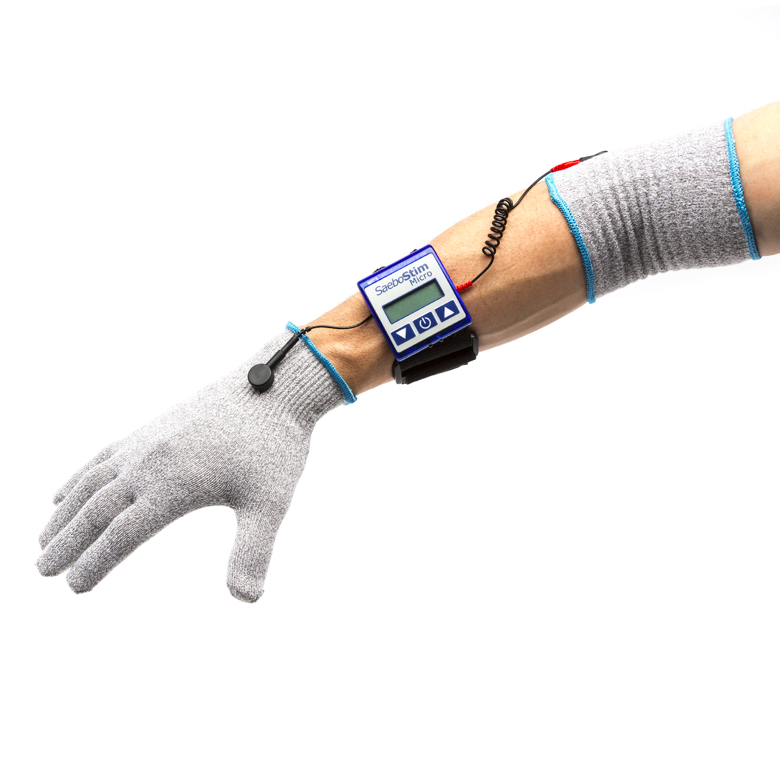 The SaeboStim Micro provides low-level sensory electrical stimulation (SES) to the arm and hand using a specialized electro-mesh hand-and-forearm garment. This device delivers a low level electronic pulse that will not cause muscle contractions, but will help alleviate pain and edema, all while keeping the connection between muscle groups and the brain open. The SaeboStim Micro can also decrease spasticity, improve motor function, increase sensation, and improve inattention and neglect.

Electrical Stimulation Can Help A Survivor

Do you want to support the Saebo mission? We invite you to invest in our crowdfunding campaign on StartEngine:... https://t.co/N3hxQoMmE6