Treating Hemiplegia and Hemiparesis After Stroke

Severe physical stroke symptoms affecting one side of the body may fall under the category of hemiparesis or hemiplegia. The hemiparesis definition and hemiplegia definition may seem confusingly similar at first, but the difference is fairly simple, and the hint is in the names. Both hemiparesis and hemiplegia share the Greek root “hemi,” meaning “half,” but the suffix “plegia” literally means paralysis, and the suffix “paresis” indicates a milder “slackening of strength.” Let’s take a look at how each condition affects the brain and body.

Medical texts define hemiparesis as weakness in one side of the body, typically impacting the limbs and facial muscles. Survivors struggling with weakness matching the hemiparesis medical definition may experience limited movement in their arms, hands, legs, or facial muscles, causing increased difficulty performing everyday activities.

How Do We Define Hemiplegia?

Hemiplegia is defined as the paralysis that affects one side of the body. A medical diagnosis will often specify either right or left hemiplegia, depending on which side of the body is affected. According to the National Stroke Association, as many as “9 out of 10 stroke survivors have some degree of paralysis immediately following a stroke.”

Hemiplegia is caused by an injury to the parts of the brain that control movement, which results in the inability to move certain muscles or muscle groups voluntarily. It’s often marked by side effects like spasticity, muscle atrophy (or loss of muscle strength), sensory loss, or pain. 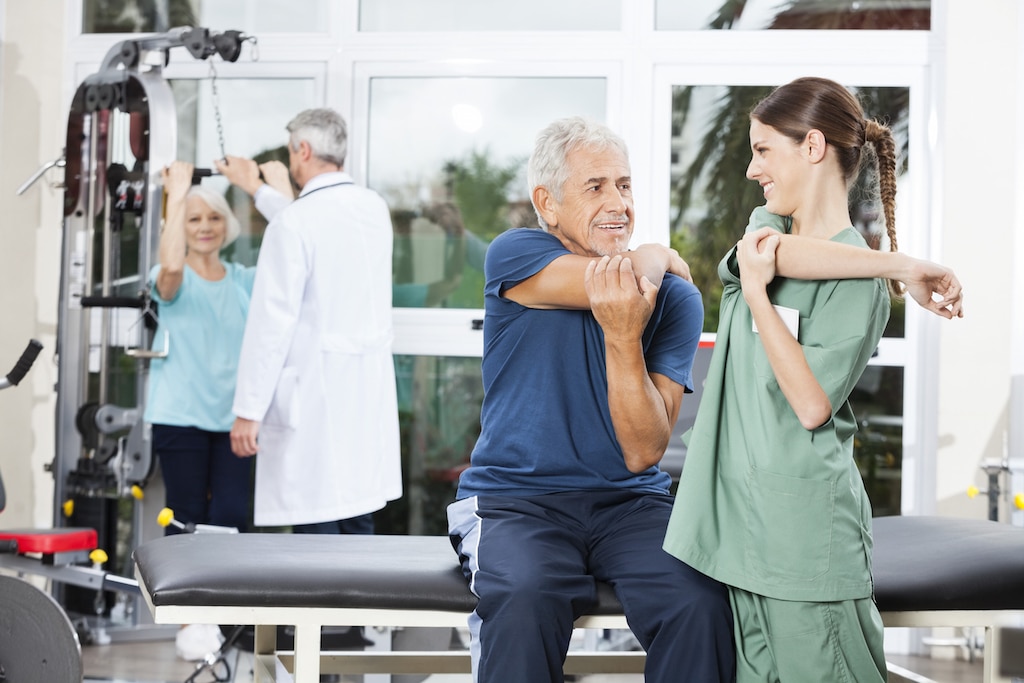 Although hemiplegia and hemiparesis are significant conditions, physical therapy, occupational therapy, and other forms of stroke rehabilitation can help improve movement in the affected areas. There are many different techniques used to aid recovery.

Muscle tone is often thought of as how strong and defined a muscle is. Tone actually refers to the normal state of tension in a muscle when it is relaxed. Spasticity, a disorder characterized by an abnormal increase in muscle tone, is a common after effect of a stroke. The term “spasticity” comes from the Greek word meaning “drawing” or “pulling,” and when spasticity is present, muscles tend to work against each other instead of together. Normal muscle tone sets the background and foundation for voluntary motions, which is why normalizing muscle tone and reducing spasticity is important to regaining functional movement.

There are a multitude of interventions that may help to decrease spasticity, including oral medications, botulinum toxin intramuscular injections, and orthotic devices, just to name a few.

One such orthotic device, the SaeboFlex, is a dynamic wrist, hand, and finger orthotic that features a spring-loaded finger extension system. These springs provide resistance to the muscles that are used for grasping, to assist in opening the hand and fingers during the release motion. It is appropriate for patients with mildly to severely increased tone in the hand. The SaeboStretch is another orthotic that is specifically designed to help neurological patients avoid joint damage while maintaining or improving range of motion in the fingers and hand.

Saebo has developed electrical stimulation devices for patients to use in a rehabilitation environment, as well as in the comfort of their own homes. 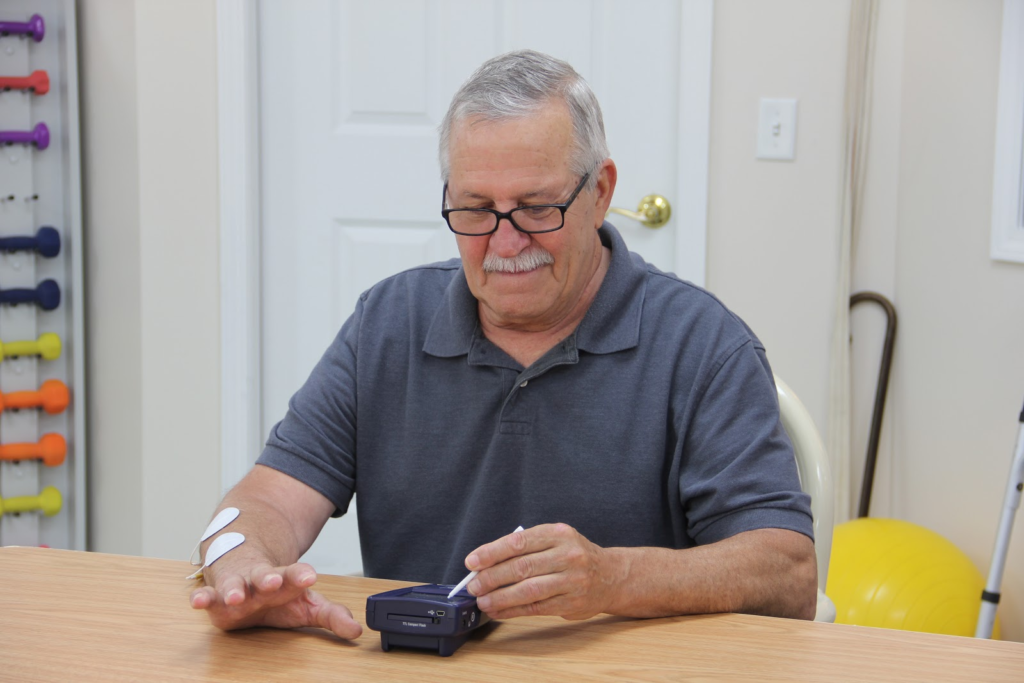 The Saebo MyoTrac Infiniti is a comprehensive and portable advanced biofeedback electrical stimulation system designed for orthopedic and neurological patients. The advanced biofeedback triggered stimulation programs (EMG-triggered stimulation and reciprocal EMG-triggered stimulation), along with the revolutionary foot drop treatment application, make the Saebo MyoTrac Infiniti a one-of-a-kind device. It responds to the user’s own voluntary muscle activity or intentional movement. This “volitional” style of application requires the user to actively participate (i.e., contract a muscle) in order to receive stimulation to the area. The clinician will set a prescribed threshold that the patient must reach when activating his or her muscles. Once this preset level is exceeded, the patient is rewarded with stimulation to the same muscles and given visual and auditory feedback to help with progress monitoring. This cognitive relearning process stimulates cortical plasticity, the mechanism by which all stroke rehabilitation is achieved. 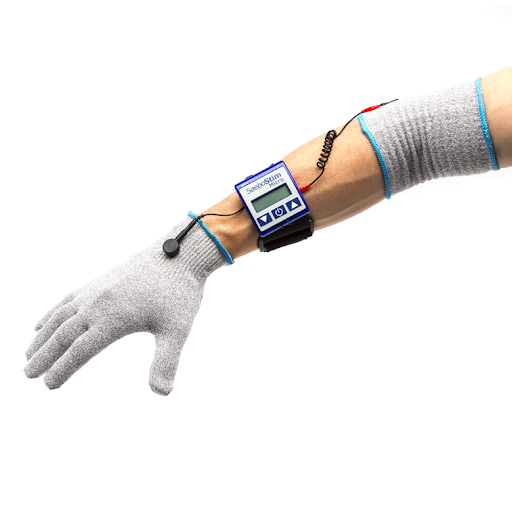 The SaeboStim Micro provides low-level sensory electrical stimulation (SES) to the arm and hand, using a specialized electro-mesh hand-and-forearm garment. This mild electronic pulse will not cause muscle contractions, but will help alleviate pain and edema, all while keeping the connection between muscle groups and the brain open. The SaeboStim Micro can also decrease spasticity, improve motor function, increase sensation, and combat deterioration caused by inattention and neglect.

Constraint-induced movement therapy (CIMT) is an intensive intervention, in which the stroke survivor’s non-affected upper extremity is placed in a mitt, and he/she is then expected to perform self-care tasks and therapeutic activities using only the affected extremity. For CIMT to be an option, the stroke survivor needs to have at least some hand and finger movement in the affected extremity, as well as be willing to devote several hours a day to the program.

Motor imagery is the execution of a movement with the mind, but without any actual movement or muscle activation. During motor imagery exercises, survivors may be asked to imagine themselves using certain parts of their bodies. Studies indicate that, during these mental exercises, certain areas of the brain may be engaged, as if the patient were actually performing the imagined activity. Such mental practice has been shown to improve arm movement in patients with hemiparesis, and research suggests that motor imagery exercises may also be useful in helping patients regain the ability to walk.

Mirror therapy is a stroke rehabilitation technique that uses a mirror box to regenerate the neural networks that control the limbs and other parts of the body. A 2016 study supports the use of mirror therapy to encourage motor recovery in cases of poststroke hemiparesis. During mirror therapy, the patient performs exercises with the unaffected limb, but because of the reflective surfaces inside the box and the angle at which those surfaces are positioned, it appears to the patient as though the affected limb is being exercised. The theory behind mirror therapy is that positive visual feedback will encourage neuroplastic growth. 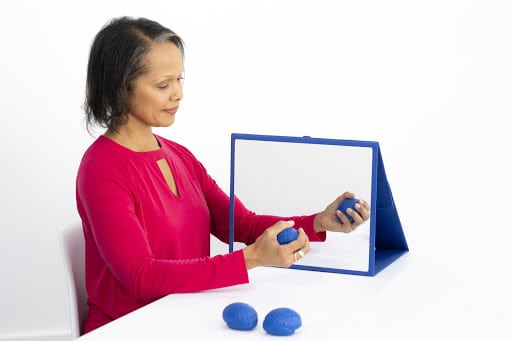 Assistive devices like braces, canes, walkers, and wheelchairs can increase functional ability in patients with weakened or paralyzed limbs. A physical or occupational therapist can recommend a device that best fits each patient’s needs. Once an assistive device has been selected, it’s important that the patient and any caregivers be trained in the associated safety procedures and proper use, including making sure the device is properly fitted and maintained.

You Can Treat and Recover from Hemiplegia or Hemiparesis

Hemiplegia and hemiparesis are unfortunate, serious side effects of stroke, but the techniques and technology of stroke rehabilitation have advanced to address these issues. Stroke support groups also provide a great deal of comfort and information to survivors and their families after a stroke. Here at Saebo, we are committed to stroke support and recovery for all survivors and their families. Saebo offers a wide range of products that combine cutting-edge technology with evidence-based rehabilitation techniques. Our offerings and network of Saebo-trained therapists can help you or a loved one to obtain all the necessary tools to maximize stroke recovery.

April is Occupational Therapy Month! We sat down with Gina Kim, MOT, OTR/L, CBIS, to learn more about her OT career... https://t.co/snOQJPTQcR