People say that “lefty” is always going to be the way it is…but we don’t give up! 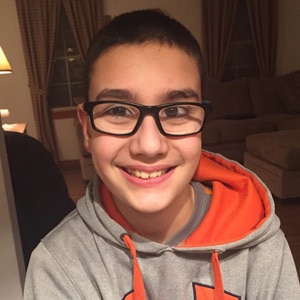 Andrew is very excited about his new SaeboGlove. There are many people who say that things will not change…that “lefty” is always going to be the way it is. Some say it might even get worse. But what could be more important than getting use back of a hand, so we don’t give up.  Andrew had a stroke in utero. Doctors said he would never walk. He did!  They said he wouldn’t talk. He did!  He had just learned to walk at three years old, when a year later he had to have double hip surgery. He had to relearn to walk again. He did.

Andrew loves life. His IQ is lower than most but he does not see himself as handicapped. He started playing trumpet in 4th grade, one-handed!  He sang at the school talent show in 4th and 5th grades. He joined the running club. In middle school, he joined the cross-country team and he just finished his first race!  Andrew is a fighter and just wants to belong.  He wants to be like everyone else. When he was four years old he sat at Christmas morning breakfast and asked why Santa did not bring him a new lefty. I have NEVER stopped looking for ways to help him and never will.  The SaeboGlove is giving him new hope of using that left hand.

With the SaeboGlove, Andrew can get his wrist into a position where he can pick things up.  WITHOUT it he has little to no control of his fingers, to grip them.

He is having a hard time REMEMBERING to use lefty with Saebo because for twelve years he has had very limited use.  As he sees success he is becoming more aware of it. He told me that one thing he can do with the SaeboGlove is he can lift weights in gym without dropping them so much, just like the other kids.