Recovering From a Massive Stroke

Since strokes are the fifth leading cause of death in the U.S., everybody should be able to recognize them. A stroke happens when blood flow to part of the brain is cut off and oxygen can’t reach it. When this happens, there are devastating consequences to brain cells that control certain parts of the body.

Strokes can be either minor or massive, but understanding the severity of a stroke will offer insight into how both kinds can be treated. The ability to recover from any stroke depends on how long it lasts and how quickly a sufferer gets medical attention. In some cases, a victim can make a full recovery, but two-thirds of those who experience a stroke must cope with long-term disability.

Below, we answer the basic questions you, your loved ones, and caregivers may have about strokes, with a particular focus on massive strokes. This information will make massive strokes, including how stroke recovery works and how long it takes, easier to understand.

What are the main disabilities massive strokes cause? 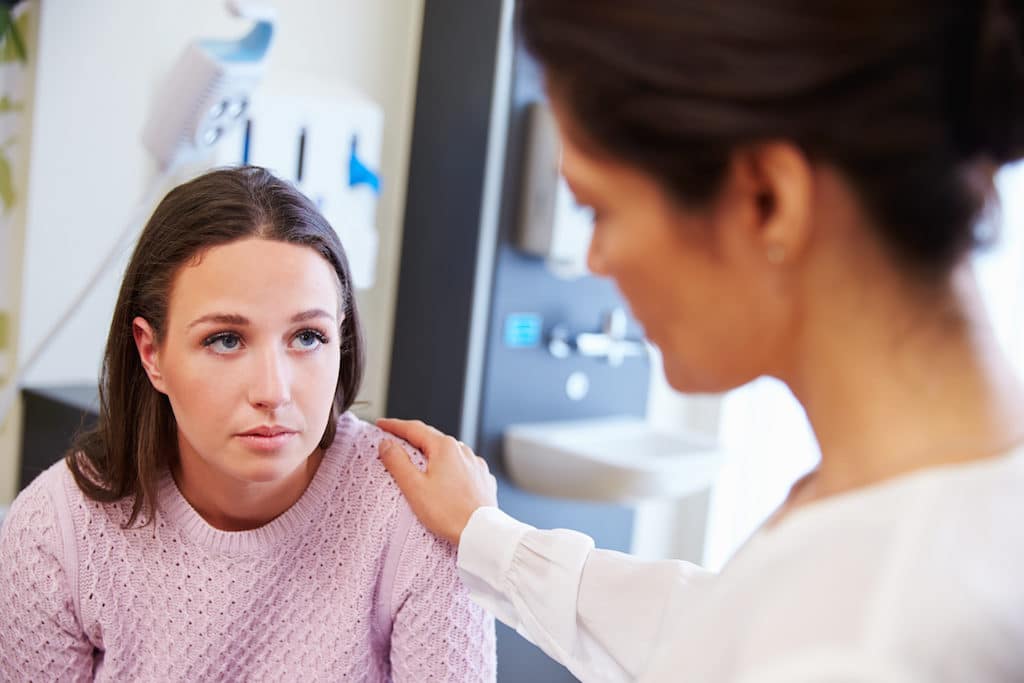 Having a stroke can affect a person physically, mentally, and emotionally. Whatever the result, a stroke can vary depending on severity and type of stroke that someone has. Along with those factors, certain functions correspond to areas in the brain that have been damaged, which are also determinants of how serious a case is. Some of the physical disabilities that can result from stroke include:

Plagued with these disabling conditions, stroke survivors have trouble carrying out daily tasks and feel the resulting emotional strain.

Which groups are affected most by massive strokes?

The majority of strokes occur in women, who have higher outcomes of mortality from stroke than men. This might be due to the fact that women experience menstruation, treatments for menopause, high blood pressure from pregnancies, and preeclampsia.

Are the symptoms of a massive easy to recognize?

Not necessarily. Only 17.2 percent of respondents overall (5.9 to 21.7 percent by state) correctly classified all stroke symptoms and indicated that they would call 911 if they thought someone was having a stroke.

Recognition of all symptoms and knowledge of when to call 911 were comparable by gender; however, ethnic minorities, adolescents, senior citizens, current smokers, and those with less education were less likely to diagnose a stroke and seek appropriate care.

Can you die from a stroke?

Yes. If the stroke is severe enough and focused in certain locations of the brainstem, a victim can experience a coma or die. After four minutes without blood and oxygen, brain cells become damaged and begin to die off.

What is a massive stroke?

Many doctors will refer to a stroke as massive based upon the outcome of the victim after an attack. A massive stroke commonly refers to strokes (any type) that result in death, long-term paralysis, or coma. 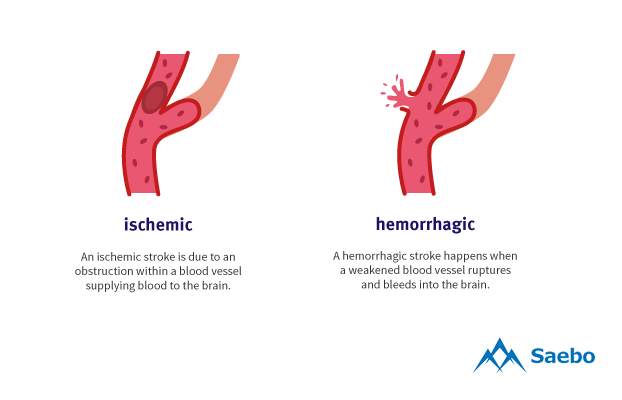 According to the American Heart Association (AHA), the vast majority of strokes (87 percent) are ischemic. These strokes are created by blood clots that are either embolic or thrombotic.

Hemorrhagic strokes account for only 15 percent of stroke cases; however, they cause 40 percent of all stroke-related deaths. Afflictions of this kind are created by either a blood vessel leak or a brain aneurysm burst. The brain begins to fill with blood that creates an extreme amount of pressure and swelling that damages brain tissue and cells.

Two types of hemorrhagic stroke are called intracerebral and subarachnoid. Intracerebral hemorrhages take place when a blood vessel within the brain bursts open and leaks blood into the brain tissue. The bleeding begins to kill brain cells, and the corresponding brain functions of that area stop responding. Factors such as high blood pressure and weak blood vessels are the main reasons why this type of hemorrhage occurs.

Another factor that may cause this type of hemorrhage is called an arteriovenous malformation (AVM). AVM is a genetic abnormality of connections among veins and arteries found within the brain and spine. With this case, blood vessels can also burst and bleed into the brain, but if diagnosed early enough, treatment for AVM is extremely successful.

A subarachnoid hemorrhage occurs when bleeding is found within the spaces between the brain and the soft tissue surrounding the brain. This instance is most likely caused by a burst aneurysm, but other causes can include AVM, head injuries, blood thinners, and other bleeding disorders.

Transient Ischemic Attack (TIA), is essentially a temporary stroke that resolves on its own without causing permanent damage. A TIA can replicate stroke-like symptoms, but typically these symptoms come and go within a 24-hour period. A TIA is a clear indicator that a more serious stroke will happen in the future.

What are the causes of a massive stroke? 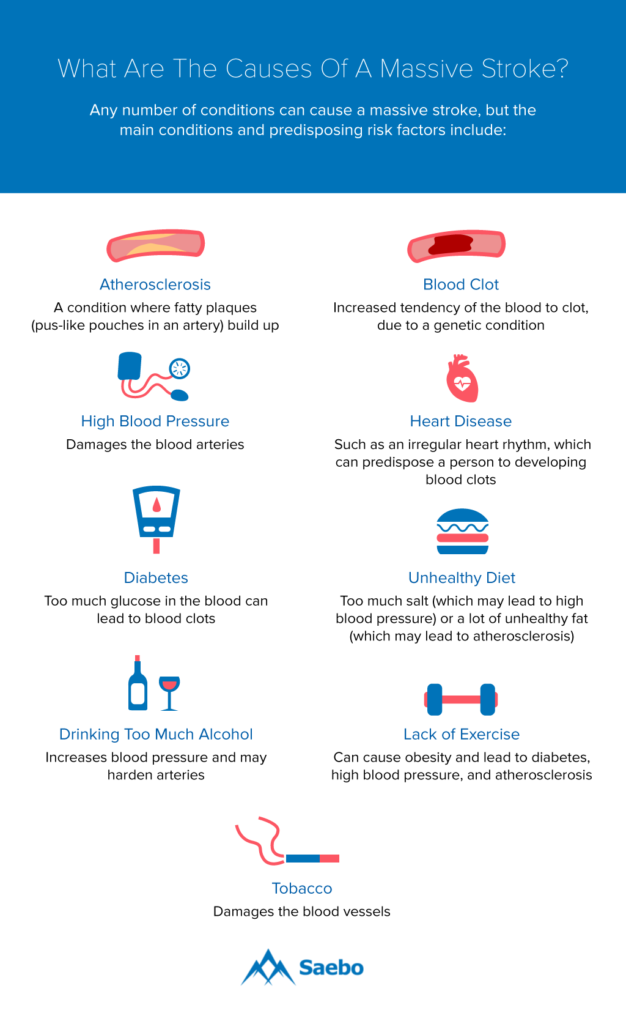 Any number of conditions can cause a massive stroke, but the main conditions and predisposing risk factors include:

What factors determine a massive stroke?

Numerically speaking, the best way to define a massive stroke is with the National Institute of Health Stroke Scale. A doctor will use this scale to assess a variety of functions, including language, vision, and ability to move parts of the face, limbs, and more. The less responsive each function is, the higher the score each function receives. Once the scores for each function are added up, a total score is given. Total scores between 21 and 42 are defined as a severe stroke.

What complications are associated with massive stroke?

Complications and resulting impairments become more serious depending on the severity of the stroke. These can include:

What emotional conditions does major stroke cause? 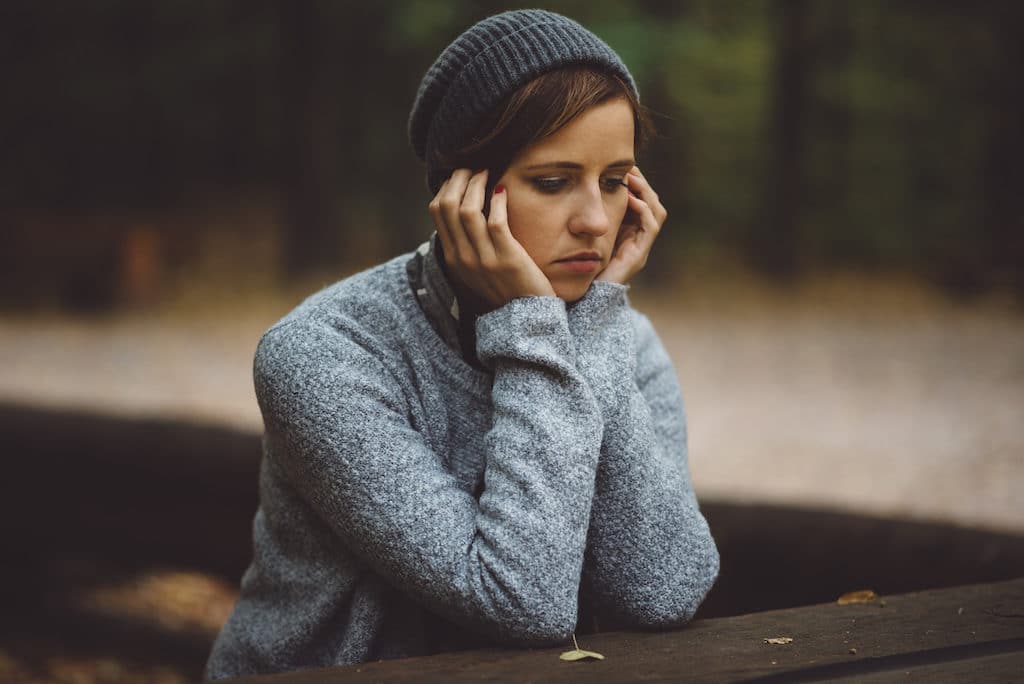 One of the major issues following a massive stroke are emotional problems due to the direct damage to emotional centers in the brain. Other emotional issues can stem from frustration and difficulty of adapting to new limitations. Post-stroke emotional difficulties include anxiety, panic attacks, flat affect (failure to express emotions), mania, apathy, and psychosis.

Other difficulties may include a decreased ability to communicate emotions through facial expression, body language, and voice. Post-stroke depression afflicts 30 to 50 percent of stroke survivors, which is characterized by lethargy, irritability, sleep disturbances, lowered self-esteem, and withdrawal.

Depression has the ability to reduce motivation and worsen the outcome but can be treated with antidepressants. Another major factor contributing to depression among stroke victims is that disability—affecting 75 percent of stroke survivors—decreases their employability, which can make them feel isolated and useless in contributing to society.

The many hardships that a victim may face can also lead to extreme moments of emotional lability. This causes the individual to switch quickly between emotional highs and lows and to express emotions inappropriately. A person can display this kind of instability through excess laughing or crying with little or no provocation. In some cases, victims will show the opposite of what they feel, such as crying when they are happy. Emotional lability occurs in about 20 percent of those who have had a massive/severe stroke.

What to take away

It’s crucial to remain patient when assisting someone who has suffered from a stroke, especially a massive or severe one. Recovery is possible in some cases, but overall, there will be new challenges to face that the victim cannot deal with alone.

By understanding what surrounds a massive stroke, anyone can become an emotional rock for a survivor to lean on. No matter how temporary or long-term the difficulties may be, simply providing care and being compassionate toward survivors can make all the difference in terms of boosting their morale.