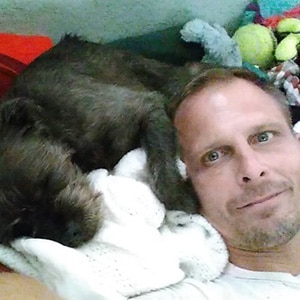 I am 43 years old and was recently the victim of a severe stabbing.  My forearm was cut all the way to the bone, severing two of the three major nerves in my arm. If it hadn’t been for the kindness of a stranger, I would have bled to death.  In the first five days after the stabbing, my doctors performed three surgeries on my arm.  Afterward, I was left with almost no feeling in my hand and very little functionality in my forearm or hand. My fingers had curled up into a fist, or what my doctors called a “claw hand.”

At the time of the stabbing, I was living alone in Texas but moved to Arizona to be near my family as I tried to rehabilitate. Even the most basic tasks, such as tying my shoes, had become major challenges for me. I suffered through periods of depression and anxiety, wondering if I would ever get the use of my hand back. It seemed as though progress was extremely slow, even though I was in physical and occupational therapy.

A few weeks ago, I was researching different options, looking for something that might help me, and I came across the Saebo website. I decided to try the SaeboStretch and the SaeboStim Micro. I figured I had nothing to lose. But after using these products for two weeks I definitely wanted to keep them.  I began to make a lot of progress.  The first time I used the SaeboStim Micro I had to turn it all the way up to 100 volts to get any result– but now after just a few weeks, I only need 55 volts.  Thanks to the SaeboStretch, I am starting to be able to stretch my fingers out again.  My physical therapist had never heard of Saebo and she is amazed at the progress I am now making. She is absolutely impressed.  I alternate wearing the SaeboStretch at night and the SaeboStim Micro during the day. Sometimes, I even wear them at the same time. I am very pleased with the results I have gotten in such a short period of time and I hope this is just the beginning.